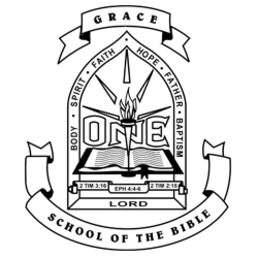 Grace School of the Bible Application

GRACE SCHOOL OF THE BIBLE

And the things that thou hast heard of me among many witnesses, the same commit thou to faithful men, who shall be able to teach others also.

The original classes were taught mainly by Richard Jordan and are now offered through a “guided individual study program” via video.  The courses are designed especially for those with “full time ministry” in mind.  Anyone, however, seeking the godly edification available through the intensive study of sound doctrine is welcome as a student.

Our main interest is in training men to teach and preach the Word rightly divided, with special focus on “the preaching of Jesus Christ according to the revelation of the mystery” (Rom. 16:25).  To this end, emphasis is laid on three basic areas:

An intensive study of the English Bible designed to provide a thorough knowledge of the Word of God according to the dispensational method set forth in II Tim 2:15, thus giving an understanding of what God is doing in this age and preparing the student for useful and effective service for the Lord.

On preaching, rather than on the executive and promotional branches and issues of the work. Classroom study plus practical tutelage and “on the job training” in getting the message out to others are combined to balance the student’s growth.

On the Reformation text of the King James Bible rather than on the critical theories that have been used to destroy the authority of that text.

The King James Bible is presented as the Word of God for the English speaking people and this position will be clearly taught and analyzed (both critically and historically).

Class DVDs are furnished from Grace School of the Bible, P.O. Box 97, Bloomingdale, IL 60108 (along with any additional class material).
Lessons are to be viewed weekly in their assigned sequence. Notes should be taken for later study.
Any questions about class materials should be directed in written form or by telephone to our office or your assigned overseer. Please do not send tapes or DVDs to be answered.
Tests will be taken on the honor system and will be supplied at proper intervals. They should be immediately returned to your assigned grader for grading and recording.
If the class is made up of more than one student, a class president should be elected. The class president shall be responsible for overseeing the proper execution of class responsibilities, to receive & play DVDs, open class with prayer and maintain relations with the school office.

Applications must be submitted to the office along with an enrollment fee of $15.

It is preferred that those enrolling have a high school diploma or its equivalent and that they have not only trusted Christ as their Savior but also have yielded their lives to God, desiring to know and stand for truths revealed in His Word.

Passing grades must be achieved for the student to proceed to the next level of classes.

Tuition and Fees: GSB is a 3-year video curriculum.  It is now available on DVD format for purchase at $90 each for 1st or 2nd semesters, and $60 for the shorter 3rd semester, totaling $240 per year.  Typically, the DVDs will be shipped and billed one semester at a time.  These fees cover the cost of carrying out this ministry, so each student is encouraged to also remember GSB in their giving to the Lord’s work.

MANUSCRIPT EVIDENCE (101, 102, 103):  An in-depth study of the doctrines of inspiration and preservation of Scripture (101), followed by a survey of the history of the transmission of the Bible text (102) and the production of the English Bible (103).  This course gives the student confidence in the Authorized Version as the English fruit of the process of preservation.

ROMANS (101, 102, 103):  The basics of “present truth” is provided in a foundational study in grace truth.  Following Paul’s design this course covers the first foundation principle for the edification and establishment of believers in the dispensation of grace.

DANIEL (101, 102):  An overview of the prophetic program is provided by a detailed study of Daniel’s basic outline.

FUNDAMENTALS OF BIBLE STUDY (101, 102):  A practical study of the basic fundamentals of hermeneutics with special emphasis on mid-Acts dispensationalism.

GENESIS (102, 103):  A detailed study of the four divine institutions for the establishment and orderly maintenance of the human race as set forth in Gen. 1-11 along with an introduction to the Abrahamic, Palestinian, Davidic and New Covenants.

PREPARATION AND DELIVERY OF SERMONS (201, 202, 203):  A practical study of the art of research and development of sermons with emphasis on expositional messages.  Special interest is paid on “delivering the goods” in a clear and plain manner.

ROMANS (201, 202, 203):  Completing a detailed study of Paul’s design for edification and establishment by covering the final three foundation principles set forth in Romans.  The Galatian & Corinthian Epistles are studied in conjunction with this course.

O.T. SURVEY (201, 202):  A survey of the message and flow of each Old Testament book designed especially to focus on the history of the nation Israel.

AMBASSADORSHIP (301, 302):  A pastoral theology surveying the main issues of the work of the ministry.  The Pastoral Epistles are also surveyed in this study.

EPHESIANS (301, 302, 303):  Continuing to follow Paul’s design for the believer’s edification, advanced mystery truth is covered in this detailed study of Ephesians.  Col. and Phil. are studied in conjunction with this course.

ACTS (302, 303):  A study of the offer of the kingdom to Israel, the fall of Israel and the subsequent transition to the dispensation of grace.  This important transition book is studied in detail.

GRACE SCHOOL OF THE BIBLE